EMB is an Emerging Bond Market ETF from iShares. In the yield-starved bond market of US for over a decade, it is not a surprise to see infatuations for such asset classes. Yielding for yield has become an accepted weakness so to speak. EMB is also option-friendly and that makes it more attractive for some. Options on Bond ETFs ? Can be a surprise for many who thought bonds were meant to be volatile-soothing alternative for stocks.

After seeing a contrasting performance of EMB vis-a-vis the other bonds(Aggregate, High Yield, Corporate, Treasuries) in the recent past, usual question that pops up in everyone’s mind: Why not more? I thought it would be good to share that through a blog. What has Niagara Falls to do with the subject? That would be this blog’s punch :). Will leave a clue in an image though!

In my view, EMB is very different from what one may have experienced with anything bond – including Ian Fleming’s Bond movies. It is that fast-paced action and juicy yields that make it enticing for investors who flock to them. For starters, EMB is an USD denominated ETF that holds bonds (also known as ‘debt’) from emerging market countries and a top dog in the space commanding an asset size of more than $5 billion. It’s gut wrenching volatility (for a bond) comes from an heady cocktail of political risk, governance risk, currency risk, economic risk and sovereign risks of those countries. To understand currency risk, emerging market currency can lose 15-30% in a short period as short as even 2-3 months. To understand political risk, what was India’s outlook on May 1st 2014? To understand sovereign risk, what happened to the Argentine Govt bonds recently?

Despite all of that, investors do take exposure for two reasons: diversification and yield and EMB has a trailing-twelve-month yield of 4.45% in USD terms. It is for the same reason why you have Emerging Market stocks exposure. Risky but rewarding nevertheless. MSCI Emerging Market Index (EEM) fell 60% between late 2007 and late 2008 but it also quadrupled between 2003 and late 2007. All in USD terms. What gives? You have to have but not with all of what you have.

I view EMB rarely as a bond from the perspective of risk tolerance. It can test your tolerance more than you can imagine going by the term ‘bond’. While the risk is asset-centric, risk tolerance is personal and it never remains the same through out the life cycle of the person neither. You have to know your tolerance before you know what EMB is and can do for your portfolio. I need to come to the other part of the subject now – Niagara Falls.

Niagara Falls is also known for people performing dare devil stunts – barrel ride, rope walk or just simply walk on the brim. Above is an image of Nik Wallenda who was doing rope walking across Niagara Falls. Nik epitomizes what is risk for some is rusk for him :).  It applies to portfolios as well where we all walk a tight rope balancing the risk and the rewards.  Below is the chart of EMB performance between late 2007 and late 2008:  That’s EMB for you – that tests your risk tolerance and also resembles the Niagara’s Bridal Veil Falls.  However, the fact remains that it recovered most or if not all of it in the following 6-9 months. Risk tolerance is not a function of whether bungee chord eventually retracts or not but more about what one feels when the chord is at the maximum elastic stretch. It is that wisdom that guides me in assessing the risk tolerance when I do the asset allocation planning. 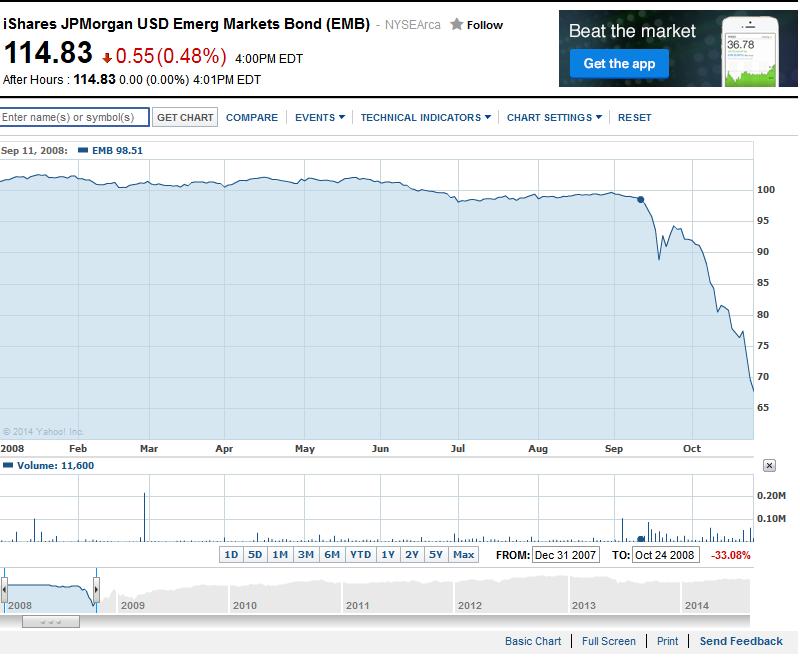 If you like EMB and looking to add more, look at your overall asset allocation and tolerance and not what EMB can do. Treat EMB’s volatility as that of stocks.  Also, there are numerous flavors of Emerging market bond ETFs – some hedges the currency risk going with USD denominated bonds issued by the Govt, some go only with Corporates and it may remain unhedged also.  Another notable one (second in the rung in terms of asset size) is PCY – which holds only EM sovereign debts. There are too many ETFs and at times, I think they need the population control measures prevalent in this part of the world to check the proliferation. The liquidity and Bid/Ask Spreads for some of these are bad and regardless of what it holds, you need to pay attention to those aspects as well.

Tell us what you think about this article. Your comments helps us. Cancel reply